Dear Students, Classes for 3rd, 5th and 7th sem will start from 01-09-2020, It will be online engagement till further notification. Get in touch with your respective proctors / departments for timetable and details regarding online classes - Dean Academics, DSCE. Department had organised alumni meet on 11/1/2019. Thirty alumni from the batch of 1990-1994 attended the alumni meet. The alumni assembled in Civil Engineering department at 11: 00 am. Head of the Department Dr H K Ramaraju, Retired professor from DSCE Mr Jayaramareddy and Alumni coordinator Dr Neethu Urs and Prof Madhu welcomed the alumni to the department. Dr H K Ramaraju along with Professor Arjun, Professor Nithin and Professor Abinandhan took them round the campus. Alumni met Secretary Sri Galiswamy and Principal Dr CPS Prakash and had a fruitful interaction. Dr Abhijith C C explained the scaled model of the college kept at heritage block and soon after they were taken to the old civil engineering block. Alumni were delighted to see the transformation of the campus, expansion of laboratories and the new modern equipments. Lunch was arranged in the food court of Lotus where they had lunch with secretary, principal, vice principals and HoD.

A formal meet was arranged at 2:30 pm in AV auditorium situated at library. Institution video and also the video of the department including the pictures of their college time made by Prof Chethan was played which made them feel very nostalgic. Principal Dr CPS Prakash welcomed the gathering. Secretary Sri Galiswamy gave mementos to the alumni. In the process alumni introduced themselves, it was overwhelming to notice that they had come from different parts of the world such as USA, Korea, Abu dhabi, Nepal and also from different parts of India. Sri Galiswamy presided over and Dr H K Ramaraju proposed vote of thanks.

Alumnus Mr Naveen Mehta, Director, Giridhari Lal Constructions Pvt Ltd, Chandigarh announced a scholarship of Rs 1,00,000/- to be given to the academic topper of the department during convocation every year and also Rs 1,00,000/- to a economically backward student who is good in academics and willing to do higher studies.

Mr Gopal Khandewal, CEO, Global creations, Bengaluru announced that Rs 1,00,00/- will be transferred to the college account and the annual interest from the same to be issued as scholarship to the economically backward student who is good in academics

Civil Engineering Department had organised alumni meet on 10/3/2018 at Gallery room, New Business block, DSCE. Forty one alumni from various batches attended the event. The programme was started with the state anthem “Jaya Bharata Jananiya Tanujate” as a mark of respect to the state. It was followed by a video which was prepared as a dedication to all the alumni. The video comprised of the photographs of the alumni, their class rooms, laboratories, survey camp, technical trip and graduation day.
The guests of the day Principal Dr. C.P.S. Prakarsh, Vice Principal Dr.Ramakrishna graced the occasion. Invocation was presented by Ms. Sunidhi, student of M.Tech structural Engineering.
Two minutes of silence was observed as a mart of condolence to three of the staff members Prof Bhosishayanna, Prof Raghu M A and Mr Manjunath who worked in the Civil Engineering Department.
Dr H K Ramaraju, Head of the Department welcomed the gathering and spoke about the importance of alumni members to an Institution.
HOD requested the alumni to introduce themselves and give their suggestions for the betterment of the department. Ms Roopa (2011 pass out) who is working in Bengaluru Metro Rail Corporation Ltd (BMRCL) since five years suggested that more number of field visits have to be organised in order to give practical exposure to the students. Mr Arun T G (2005 pass out) requested the college to allow alumni to access the library. Mr Mitra (2005 pass out) suggested that syllabus of the subjects should be changed according to the present needs.
Principal Dr. C.P.S Prakarsh spoke about the importance of alumni network with its alma matter and how their interaction with the department helps their fellow juniors. Principal also made a note of Industrial Conclave conducted in the college which was grand success. Vice Principal Dr. Ramkrishna thanked all the alumni for being associated with the department.
Prof Neethu Urs proposed vote of thanks. The alumni visited the department and they were very happy to see the changes in the department.
The program ended with group photo and refreshments. 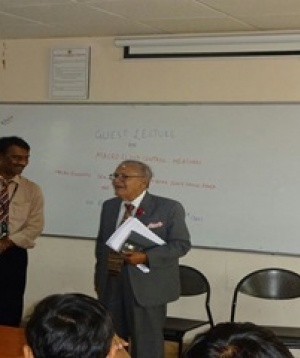